“I know what you’re doing, but I don’t think it’s going to work. If you didn’t do it, I’d have done it myself, but that doesn’t mean I have to like it. 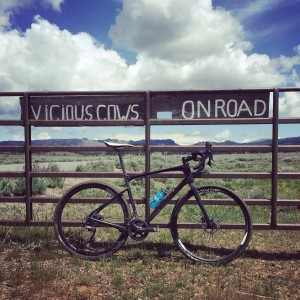 Roadie cows are the worst.

It was mile 93 of the Lost & Found Gravel event nearing the top of the last decisive uphill before the finish. He was implementing a “slow burn” attack tactic—slowly accelerating to a pace that might drop me instead of jumping away and possibly cramping up. It was just Tobin Ortenblad and I and we both knew the score—we’d both known the score for 30 or 40 miles: neither of us could shake the other, and the whole damn thing was going to boil down to a sprint for the line at mile 102.

Tobin had to test me on that final climb to see if he could roll away to a safer solo victory. We’d been working together since I’d done the same testing of him on the rough-and-tumble “Vicious Cows” section at mile 78. But neither of us was going to be shaken that easily. Between pulls I brought up the stats:

It was a good day.  A perfect day of racing in the Lost Sierra of Northern California.  After a late spring and weeks of unseasonable rain, the sun shown warm on the 8am start.  My belly still full from an indulgent pre-race buffet the night before at Nakoma Lodge, we rolled out of the event’s new start/finish in the historic railroad town of Portola. This year’s course would be different—there’s a new route every year—but this year more than ever. In place of the usual dust was dark brown earth, dry stones appearing in stark contrast against it.  Visibility and grip were everywhere, along with countless seasonal stream crossings. The race would be front loaded—the lion’s share of the climbing and technical descending would be in the first 30 miles–which had the potential to blow up the entire race as every Tom, Dick, and Harry would have opportunity to push an unsustainable early pace. 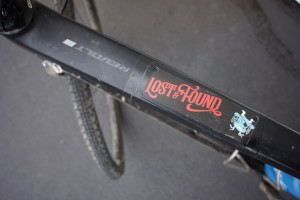 But as the front of the group settled into the first and longest climb of the day, there were (thankfully) no apparent Kamikazes. Two Easton Overland teammates were driving the pace with conviction, but with some modicum of restraint. And after the first hour, Michael van den Ham alone had winnowed the 1400 starters down to an able group of nine. All the key players looked to be in attendance: CX honches Jamie Driscol and Cody Keizer, Overlanders Richey and Van Den Ham, a visibly strong Barry Wicks, Collegiate CX Champ Grant Elwood, Dillon Caldwell, Tobin and myself.  A pattern developed: Van den Ham would stretch us out on the climbs, Wicks would stretch us out on the descents, and the rest of us would try not to blow up our legs or our tires trying to stay in the hunt.  The group accordianed, but did not break up.  Could so few decisive features in the final half of the race result in a first-ever bunch-sprint finish at Lost & Found? God I hoped not. None of us really knew the route to the finish—they’d set out the cones after the start—and it might get messy.

On the last major climb at mile 40, Van den Ham did his thing off the front again, Wicks was chasing over the top, and things were getting decidedly harder. As we descended the other side, I worked to bridge to Wicks, and brought Tobin with me in so doing. As the downhill leveled off, I looked over my shoulder and saw there wasn’t anybody chasing in the 100 yards of road that was visible. I patted Michael on the shoulder and said “This is the split, let’s make it stick” as I rolled to the front to take a committed pull, hopefully setting an example for our impromptu alliance.  With 60 miles of mostly flat gravel roads to go, everyone seemed pleased to have some company that was eager to work. We all pulled equally for the common good—and we were rolling. 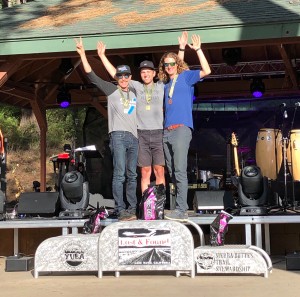 An old man, a young man, and a Sasquatch walk into a bar.

At mile 55, Michael’s bike stopped shifting (“New Bike Day” and “Race Day” being one and the same) and he couldn’t do much but watch as the other three of us pedaled out of sight on a mellow downhill.  And then it was just Barry, Tobin and I, all a little giddy that we’d be on the podium together if we could just keep from exploding for another 40 miles. Wicks and I are great friends, and after so many good battles with “McTubbin”—both around Lake Davis, and the cyclocross circuit, we’ve developed a cheerful rivalry that’s as hard-fought as it is strangely gratifying. With two hours to go, the selection had been made, our group was working well together, and at worst, a podium finish was in the offing.

In 2017 I attacked at the roughest “Viscous Cows” section of that course to win my second Lost and Found. So, with no major challenges between there and the finish this year, I again pushed at that point, trying to shake these two friends and adversaries. I rode hard, tried to pretend that it was easy, and did not look back. When the trail mellowed and I did steal a glance I was happy to see I’d ridden away from one of them–but it wasn’t the one that concerned me most.  After a moment of recovery, I said “Well, Tobin– I guess it’s all going to come down to an awkward sprint between the two of us.”

Coming over the bridge into downtown Portola and the finish straight, the race course—cordoned off with large traffic cones—was narrow, and strewn with finishers for the 35 and 65 mile events we’d been quickly overtaking since the courses came together 20 miles prior.  I’m a pretty good sprinter for a 44 year old mountain biker. Tobin is a good sprinter without such qualifiers. As luck would have it, I’d be sprinting from the front—not my preference on a long and fast wind-up to the line. But cresting the arc of the bridge, I could see maybe five interspersed short-course riders lumbering along toward the same goal, like so many floating logs in a high stakes game of Frogger. Confusion, mayhem, and danger were my only hope—I jumped on the pedals as hard as I could. 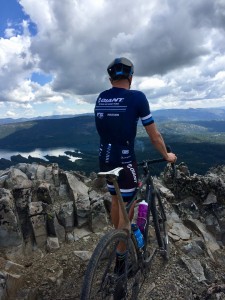 As the speed built and we started weaving right and left around these other (probably more than a little startled) riders, I felt like it might just work out for me. There was a narrow gap of maybe six feet between the cones and the last person we’d pass 50 meters from the line—Tobin couldn’t come around before that, and he likely wouldn’t be able to come around after at this speed either.  The bike was great, my legs were better than I’d hoped, and I was flying as I approached the shadow of the Cliff Bar finish archway. But in the final second, Tobin’s front wheel came by on the right, and I knew the jig was up as I crossed the line a half-wheel back.

The muscly man from Santa Cruz had taken another win.

This year’s Lost & Found was probably the funnest one yet, and all of them have been fun.  It was probably the easiest one yet—but none of them have been easy. This year I again rode my trusty Giant Revolt Advanced, with a 36/46 double ring driving an Ultegra RX shifted 11-30 cassette—nice, tight gear ratios kept me in the perfect gear all day. SLR 0 carbon wheels saved some weight over last year’s setup, but the tires were the same: 40c Maxxis Ramblers—the most popular tire out there— at 34/39 psi. I never missed a shift, nor an apex, thanks to my Revolt.

Until the L&F game resumes next year,