The last time I won a UCI cyclocross race, Richard Nixon was in office. Well, maybe it wasn’t quite that long ago, but there have been at least a couple of US Presidents since my winning streak at Starcrossed came to an end. Cyclocross is about momentum in so many ways. Adam Craig and I can talk ad-nauseum concerning the minutia of how to maintain momentum through a grassy off-camber corner. But for all our carefully conserved momentum on the track, our CX racing seasons usually lack any momentum at all. Adam and I arrive late to the CX party and leave early. For us, it’s a season flanked by a long spring and summer of MTB racing on one end–and by a winter of requisite physical and psychological recovery on the other. So we show up, we start towards the back of the grid, we fight our way to the front-of-the-middle of some races. And then we go skiing. 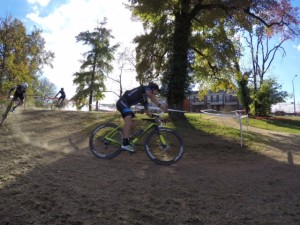 But getting roughed up by riders you think you should be beating isn’t much fun, regardless of how little you’ve paid your dues. So this year, AC and I decided to do something about it. And for us, that meant heading East.

It had been a long time since Adam and I last made the pilgrimage to that other stronghold of American Cyclocross–the East Coast and New England. So both of us were excited to return to the Right Coast, as the UCI events out there are good and plenty. While the closest UCI race to Bend, Oregon is 900 miles away in a dusty, lumpy park in Los Angeles, the East Coast is chock-a-block with races. In three weekends at Gloucester Mass., DC, and New Jersey, we’d race 6 UCI events. All on lovely, smooth, rolling, and grassy tracks.

Along for the trip was another MTB racer also from Bend, our Liv Cycling counterpart, Serena Gordon. Serena is a keen racer. And like a sponge, she absorbs and carefully stores every bit of helpful advice (and probably some that isn’t helpful) that AC and I give her. Then she applies this knowledge immediately, sometimes surging forward in her racing ability, and always thanking us for the help. Serena pays attention and she works her ass off–so AC and I had a good time on this trip showing her our (often unique) lines and talking about bike setup and racing strategy. 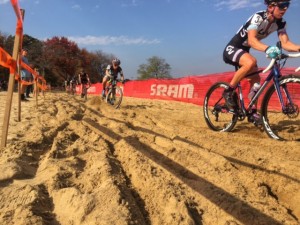 So this East Coast Swing became a source of pride for our whole operation when Serena had her best UCI finishes ever at Gloucester. And then followed that up with her first podium at DCCX. The Team mechanics, AC, and I nodded approvingly.

And then she was second and nearly won on the first day in Jersey. And finally topped that with an outright win on day two. It was a whirlwind of personal bests for Serena on this, her first big CX trip with the Giant Factory Off-Road Team. It was fun seeing what she was capable of–with top level equipment and a proper crew backing her up.

The final race weekend of three, HPCX (in New Jersey) is hilly–and going uphill favors the strong over the crafty. But the rolling and swooping course was taped wide, allowing multiple line choices through many of the corners. The grass was fast and smooth, and though the course wasn’t particularly treacherous, Adam and I both perked up as we continued to find better routes through the corners than the burned-in lemming-line suggested. By now, we’d also gotten the feel for our slick new tubeless Zipp 303 Carbon Clincher wheels. After a couple weeks of racing, we were confident of our pressure 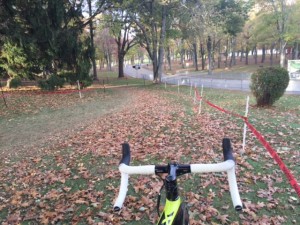 settings (27/29psi for me) and were getting more and more comfortable at their impressive limits. The course seemed to offer some advantage to good bike handlers on properly set-up machines.

From the gun on Day One, AC and our expatriate quasi-teammate and Giant rider Jeremy Durrin sprang to the front and rode away from the field. Then a couple laps in, Jeremy made a mistake and came back through the field, leaving just Adam off the front. For much of the race, I’d see Adam in the same places on the same corners, indicating we were riding the same pace, but he’d ridden a devastatingly fast second lap to establish that gap, and the race was his to lose. The rest of us were left desperately fighting for scraps, the top riders all toiling alone with large gaps between them in the final laps. Adam would win his 3rd consecutive HPCX and I’d have a great ride to finish 4th–my best UCI performance in years. Our new “Nuclear Tennis Ball Yellow” bikes abetting our at-the-limit cornering antics with handling beyond reproach. Kick Ass. 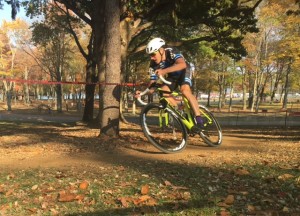 Carving corners on a well-engineered and properly set-up CX bike is one of cycling’s great joys.

Significant course changes greeted us as we arrived to check out Day 2 of HPCX. The flow of the course was similar, however, with the exception of two 80 meter sand traps half way through the lap. Adam and I were happy to see that a few of the corners we’d exploited for profit the day prior were still in play. Just prior to the start, Adam traded his team jersey with a spectator for a Stars and Stripes tank-top so that he could race in a costume–of sorts– on the eve of Halloween. And then the UCI official made him change on the starting line, enforcing a reasonable rule–that you have to have a jersey with sleeves if you are in a race that requires sleeve numbers. This had our Team Manager, Sparky running around with his head cut off for a moment. And it wasn’t my fault, so it was kinda fun.

The race started much the same, with me conservatively drifting aft through the pack on the same paved holeshot hill as Saturday. I’d work my way up to 10th or so on the first lap, and I could see AC near the front, likely about to leave everybody for dead as he went for another win.

But then something different. I felt better on my bike. And I was slowly bridging gaps andmoving toward the pointy end. 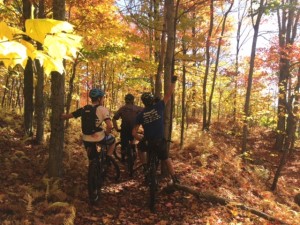 The racing was great, but even the midweek rides were top notch on our East Coast Swing. Maybe the East Coast isn’t so bad after all.

Indeed, with three laps to go, I decided I might even be able to win the thing. Durrin was alone off-the-front, but I was gaining on him and I suspected I might out-fox him if I made contact. And I was excited to try. With a lap to go, I’d closed to within 8 seconds.

With 2/3 lap to go I made contact. I smiled at Jeremy and said “This is gonna get interesting!” I couldn’t hear his reply. I don’t think he was as excited as I was.

Then I went to the front and rode more deftly than I had all weekend through a long string of corners. And I reckoned I’d maybe shaken him–but then I saw a flash of his TCX’s neon yellow on my left as he aggressively and narrowly–but cleanly–beat me into the first sand trap.
We both knew it was his only shot at taking back the race, and it was a smart attack. I smiled through my grimace.

Moments later, I pulled even with him into a buttonhook corner before the second sand trap, forcing him outside, but gentlemanly, as we were flying the same colors. Jeremy allowed me some space. 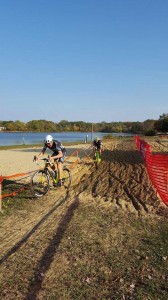 The final section of sand on the final lap. Durrin gives chase.

When we hit the final stretch of sand, I opened a small gap of a second or two. And then I rode very very hard while seated, hoping to send a message to Jeremy that this pace was sustainable and I could do it all day. It wasn’t and I couldn’t– but it worked. Durrin began racing to keep second place with 3 minutes of racing to go.

40 seconds before the finish line, I saw our Road Manager, Sparky taking photos in the final few turns. I gave him the shaka and flashed a big, cheesy grin. I couldn’t help myself. I’d just won my first UCI Cyclocross race since the War of 1812!

So everybody under the Giant Factory Off-Road Team tent took home a win this weekend, after three weeks of slowly building momentum in that direction. I think we’re all excited to get down to CXLA in Los Angeles in a couple weeks and see if we can keep this ball rolling. I’d be remiss if I didn’t thank our mechanics, Sparky and Drew for all that they did for us Back East. We showed up in Massachusetts to newly built, un-ridden bikes, and 6 races later, we three riders collectively had one pit stop–me for a slowly leaking tire. The bikes are working flawlessly. And for that, those guys are responsible. It’s a good thing too–Adam and I are crappy at bike exchanges. 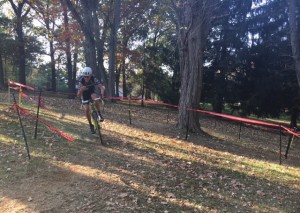 I don’t always give Sparky the Shaka during bike races. But when I do, I win a UCI race.

Thanks for following
Cd

2 Responses to The East Coast Swing