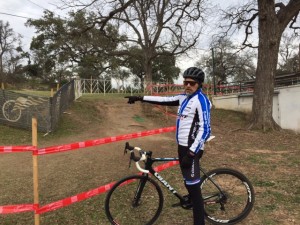 For the earlier races and our practice, the track was perfect: fast, smooth, technical and off-camber all at once.

“Keep Austin Weird” is a slogan seen on murals and car and truck bumpers throughout that Texas city. I’ve been traveling to Austin here and there since my brother, Chris packed his belongings into a turquoise Honda Civic and moved there 10 years ago. I like Austin. It’s a little different, and in Texas, a little different is good.

Three weeks ago, my brother sent me a text message with a link to a local news article. Austin was postponing it’s New Year’s Eve celebration for a week due to inclement weather (read: average PNW New Year’s weather). “Not a joke” was all Chris said. I thought it was ridiculous but soon forgot it. Little did I know an important precedent had been set…

Later that week, I wondered what my legs would be like for Cyclocross Nationals in Austin and decided to look at airline tickets. I figured it might be worth the trip to Austin to see my brother, eat some barbecue, and find out what a month of splitting wood and drinking egg-nog had done for my fitness. Fitness that a–month prior–was pretty darned good.  The tickets on United were surprisingly cheap. I booked one. 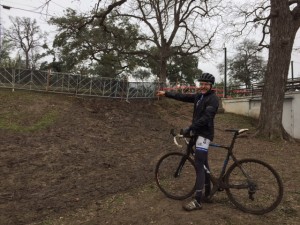 I arrived four days early for the event, planning on enjoying the warm Texas weather and maybe some good rides before the race. I was surprised to find that the weather was colder and grayer than the Oregon I had left behind! I guess I didn’t need to pack all that sunblock after all.

Wearing every piece of clothing I had packed, I rode down to Zilker Park to check out the track. Zilker is the centerpiece of Austin’s park system. Right across Town lake from the City, it plays host to Austin City Limits, a Kite flying festival, and many other large events each year. The adjacent Barton springs pools are the best place in Texas to go for a swim 10 months out of the year. They’re cold for Texas, warm for Oregon, and jam-packed with locals and tourists alike when the mercury rises. Arriving at the venue, I noticed far fewer cars in the lot than the last time I’d been here in spring, despite races going on.  The only action at Barton Springs was steam slowly rising off the cold (for Texas) water into the cold (actually cold) air. 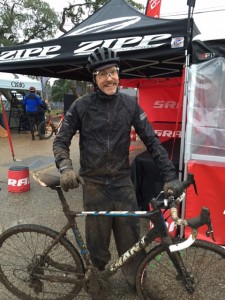 A happy camper after a slimy Saturday practice.

The track at Zilker was stellar. The surface was smooth clay and grass, with fun off-camber sections and great flow. The limestone ledges of the run-ups were tall and uneven–difficult, but cool looking. The track was incredibly grippy and fast, yet challenging and fun. Laps were short–probably in the mid six minute range. A look at the  forecast that night indicated some rain was likely in the coming days. Surely this would make the track even better–well, at least for the undertrained among the ranks… Happy days!

On Thursday night we headed to The Salt Lick with the Bend Endurance Academy folks. BEA is an outfit that teaches skiing and cycling to local kids and is building some incredible racers with great skills and attitudes to match. They’d sent a couple dozen riders to the Texas Nationals–an amazing feat for a small town 2400 miles away. Bill Warburton is the head coach for BEA and I told him he should bring the kids out to the Salt Lick. He agreed.

It’s a bit of a drive from the city, but the Salt Lick is worth the trip for a meat lover. Featured on Food Network shows, the Lick also plays host to weddings, and is basically a giant campus dedicated to smoke and meat. I pay it a visit nearly every time I go to Austin. It was great to see 30+ racers and supporters from Bend out there on thursday night. It was a Cyclocross Nationals field trip of sorts. Or an Oregonian reunion in Texas. I hope they all enjoyed it. 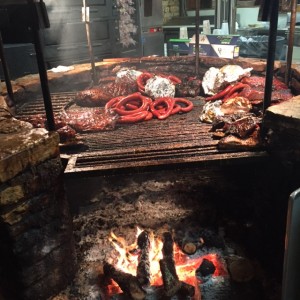 The fire makes the meat sweat. Then the meat makes you sweat.

By Saturday, the rains had come and the track was a disaster. Anything that wasn’t flat was ultra-greasy. Anything that was flat was covered in peanut-butter mud that clogged wheels in frames, and made bikes unrideable in a matter of seconds. Only by merit of my TCX having tons of mud clearance was I able to pedal at all. It took 20 minutes to “ride” a practice lap. What was once grippy moist clay was now an utter mess. I was PUMPED!

For years, I’ve carried “spikes and flats” with me to CX races waiting patiently for this exact scenario. A set of $10 plastic pedals and some dingy yellow 1988 Adidas Olympic Edition middle distance track spikes don’t take up much room in your luggage, and on the right day–an icy or muddy day where you’re going to be running a lot–they might be worth having. And riding them would make for VERY interesting racing. Without clipless pedals and cleats, you’d suffer on the pedaling bits and get passed. And then you’d pass everybody back in the run. Even if you kinda suck at running with your bike, hopefully! Much like riding a single speed amongst geared racers, the balance of power would shift. And on the right day, I’ve always thought flats and spikes might offer a big advantage. And maybe even lead to a big win. 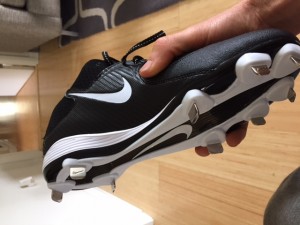 Can you imagine running in mud amongst guys in cycling shoes with these bad boys?

Upon returning to the house after Saturday practice, I decided I should have the spikes and flats option available on the still off-chance they’d be a good call Sunday. The problem? In my haste to leave for sunnier pastures, I’d neglected to bring the shoes and pedals. Chris and I hopped in his old Cummins pickup and headed for Academy Sports. We were nearly giddy while comparing the cyclocross merits of everything from XC spikes to football and softball turf shoes. We settled on a set of GNARLY Nike baseball cleats and a set of crap nylon pedals each for Alice and Beatrice (my A and B bikes). That night I listened to it raining cats and dogs while I tried to sleep, a sneaky smile painted across my face. My new “secret weapon” resting on the nightstand.

Morning dawned and several hours later, I awoke (what’s the rush on race day?) to find that the race had been cancelled. Details were sketchy, but it became clear that the Austin Parks had failed to inform USAC of some city ordinance regarding setbacks for the park’s old oak trees. Apparently, the park was officially closed and the Austin Police were ready to kick some ass if people didn’t stay out. So USAC cancelled the race and then cancelled their cancellation and postponed the race, and finally, later in the day, announced the remaining races would happen on monday afternoon on a mildly reworked course. By that point, I’d been lying around the house looking at my shiny new Nikes and crappy pedals most of a day and needed to get out of the house and drink enough beer or ride my bike enough to feel happier. 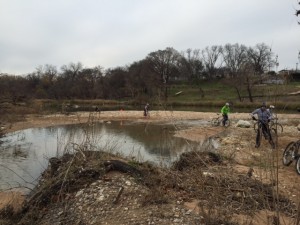 Not sure what it is about water crossings, but I love most tracks that have ‘em. They make me feel like a kid again.

Tina wanted to do an underground race that she’d heard of from Team Super Awesome and the Radavist. I was reluctant to join some kind of cat-herding mission, but relented and joined the scrum as they left a nearby shop for the longish riverside ride to their unsanctioned venue. After a beer, and a lap of their usual Wednesday night race track, I warmed to the idea and joined in on the fun. The race involved a seated start and a canyon wall scramble to our bikes. Brennan Wodtli had the holeshot and I had to work pretty hard to catch him, but then we rode together, showing each other our best lines and trying to not get too soaked in the river crossings as the sun set. We shared a beer hand-up. In the finale, I barely stayed ahead of Brennan in the steep run-up to the crowded and boisterous finish. Tina and her teammate, Laura finished 2-1 in the girls category and we all stood in a puddle for the impromptu podium and handing out of prize money hastily raised over the afternoon. Thanks to John and company for making a very cool end to a pretty lame day. That was memorable. And we didn’t even die during the team-time-trial back to my brother’s house in complete darkness. 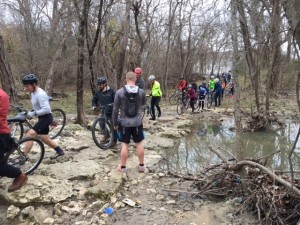 Another Fountain of Youth at #CXNots

Monday Monday Monday! Just doesn’t have the same ring, does it? Race day was a little misty and overcast. The track had slight changes around tree root areas, but mostly the track was just slower and heavier than it was over the weekend. The area near the pits was, well–the pits. During practice it required maximal effort to stay on your bike and keep the wheels from binding in your frame, on flat ground. The off-camber stuff was less heavy, but still difficult to ride–everybody was running most of it. The track was great, but conditions were questionable. I was excited to see what I could do.

I had a decent call-up in the 3rd row, and I lined up one rider over from my favorite wheel to follow in CX races: Ryan Trebon. The gun sounded, I hit my pedal cleanly, and was on Ryan’s wheel. And then he made the Gigawatts happen and I watched him ride to the front while I looked for another less motivated wheel to follow. And that’s when I saw bikes tangling in front of me. There was a sizable pile-up on the asphalt, and I was trapped against the fence by a couple of fallen riders. I hadn’t fallen and was unharmed, so freed myself and began the long and terrible task of playing catch-up. Despite good fitness a month prior, the legs quickly responded with that not-so-fresh feeling when push came to shove. Today I would not be overcoming great obstacles to soldier to a good finish. Today I would nearly get lapped on the final (9 minute!!) lap by a charging Powers. So 31st place and an unused pair of shoes that needed to be retuned to Sports Authority for this guy! Not what I was looking for, but bad luck on bad days is kind of good luck if you’re a glass-half-full type of guy. And I was on this one. 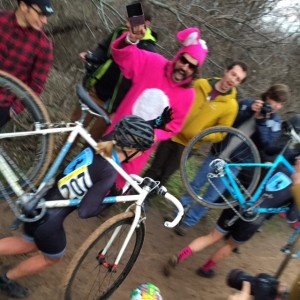 The finish of the girl’s CX “Nots” race.

I write this two days later from on an expensively re-booked United flight. My belly is full of meat. My legs are mostly empty. My mind and body are ready for a month or two of avoiding bicycles even when I don’t want to, so that the hunger is strong for the 10 months of 2015 that I’ll be racing and training. I’m glad I went to Austin, if only for the stupid fun of shopping for turf shoes with my former Mrazek-Deschutes Brewery teammate and brother, Chris. And the slightly smarter fun of a somewhat illegal race among mostly strangers in a park I don’t know the name of, somewhere in South Austin, Texas.

Keep Austin Weird.
And thanks for coming along.

One Response to The Austin Debacle