The Meat and the Potatoes 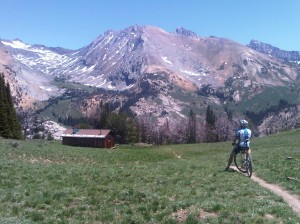 Kelli said this 5hr ride would be good for Leadville. I couldn't care less.

A season of bike racing is long and there are ample opportunities on the calendar to have some good results.   There’s plenty of room for making mistakes, having lapses of fitness or judgment, and still coming through New Year’s Eve with a sense of pride in accomplishment, instead of a resolution to turn things around.

That said, as the schedule takes shape, an Important Part always comes into focus.  By virtue of the geography, the timing, the courses, the competition, or what-have-you, there’s always a part of the calendar, ripe with pen marks and red circles and gold stars that is your meat and potatoes.   Have your ducks in a row for these 20 numbered squares and you’ll bring home some hardware, some long green, or maybe just some laurels to rest on through another winter of training.

This spring was the third wettest in recorded history in Bend, and through the wind and rain and cold and loathing, July was the bounty that kept my pedals turning.  The meat would be Downieville, the potatoes, ironically enough, were to be found in Idaho:  the National MTB Championships.  Flanked on both ends by some very winnable Super Ds, and some other Pro XCT series races, these races in July would be the main course of the race season.

Preparation was required.  In June I began the honing of my fitness, with hard rides in the mountains, road races, and salads for lunch.  I washed my motorcycle to such a high standard that it would keep me from riding it.  I began to avoid the sick and the infirmed; I declined a ride with my dad in his new car the day he drove it home.  I’m a car guy.  And I love my dad.  But I didn’t know about that cough.  I’d do nothing that might compromise July.

Things came together according to plan.  The last week of June saw an hors d’oeuvre of Super D victory at the Wisconsin Pro XCT.  The next week, a win at the Bend Super D.  The appetite had been whet.

After a runaway victory in last year’s All Mountain contest by some bald dude on a 29er (the horror!) big changes were afoot this year in the little town of Downieville.  The race would be decided by points, with equal weight for Saturday’s XC and Sunday’s downhill instead of combined time for the two events.   In addition, the courses were both truncated due to record snow pack.  Indeed, the race wouldn’t have been run without over 100 volunteers wielding shovels and snow blowers.

A few days of riding the courses saw snow-blower width snow canyons melt out to fresh trails as Kelli, Josh “HuckTard” Carlson, and I got comfortable on the trails.   My Anthem X 29er was all pimped out with new gear:  140mm Revelation fork, 2012 XX brakes with big 185 rotors, enormous 2.4 inch Racing Ralph tires, and a Reverb seat dropper (the dependence has begun!), and it and the trails were riding sweet.

Once again, Saturday’s XC turned into a bit of a rout.  The ball-breaker of a climb—3000’ without shade—saw Sid Taberlay and I off the front with a sizeable gap.   We rolled across the top piano, as the roadies say, looking over our shoulders for other advancing riders, neither of us keen to do any work for the other.  I made sure I was at the front as we dropped into Butcher, the rowdy—and wet—beginning of the descent.  I could hear a gap opening to the Aussie, and after a minute or two,  I stopped hearing Sid.  Sweet.  By the finish line I had 4 minutes or so on 2nd place, the Hucktard!  Josh had rode to 2nd from ninth at the top of the climb.  Other notable finishes:  Emmett with 12 minutes over 2nd place Lizzy English, and Tina “Sweet and Low” Brubaker in 4th in the pro women’s field.

Winning Sunday’s downhill was a personal goal I had set last year.  I don’t normally set goals, but I had a little of an axe to grind, as some people looked askance at a 29er XC bike winning in the realm of 6” trail bikes last year.  They thought it was gay.  I thought a big bike was a copout for people that can’t pedal anyway.  Winning the DH on the same bike as last year would prove neither of us right.  I wanted it badly.

My run was not perfect.  I took a small crash in the waterfall section and did a pushup in the stream bed, but I kept it together for the most part, and I was flying on the bottom half of the course.  But nobody has a perfect Downieville DH run.  I rode past nearly half of the people who had started before me on the 38 minute descent, all of them with broken bikes or punctured tires.  At the finish, I had the fastest time so far, with most of the favorites already finished.   I knew though that Josh and Aaron Bradford were coming down later…

I’m not a nervous person, but damn if I didn’t have an ulcer by the time all the pros were finished.  The outcome: Bradford nipped me by 5 seconds in the DH, and Josh punctured.  Thrice, I think.  Which meant I’d won another All Mountain “World Championship”.  Kick ass.  Thank you, kind bicycle, for again delivering me safely and quickly into Downieville.

A quick champagne spray, a long drive home, some laundry duty, some Blitz to the Barrel practice with Kelli and Tina (and some dominating and money making by them), and another long drive brought the team to Sun Valley, Idaho for Nationals.

The courses were at River Run, and the topic of discussion in everyone’s camp was the monumental hill on the XC course.  Straight up the ski slope, steep, slippery, and exposed to the sun, it was a polarizing piece of track that we’d get to race up six times.  We at Giant united in our disdain:  one practice lap will be plenty, thanks. 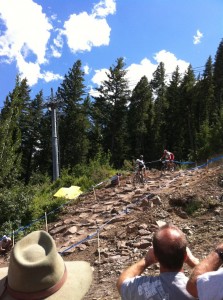 Rudy chasing me through the hand-made rock garden in the XC.

AC and Kelli had solid races though, and both landed on the podium, while I suffered deeply to finish in the teens, just behind the aged, but timeless Ned Overend.  Ouch.  At least it might have been a good opener for the Super D early the next morning…

The Championship SD course was legit: a timetrial with a substantial climb followed by 15 minutes of fast gravel drifting and forcibly staying off the brakes while nuking through singletrack.  I did a few practice runs and had my foot-out drifting down pat by Sunday morning.  With the AnthemX 29er still set up for Downieville, I thought I might–just maybe–have AC’s number.

This time it would be Adam that got to bite his nails with the fastest early time, and I put together a nigh-on flawless run.  When I passed the timing lights, the verdict was instant.  Second place by one second.  Another red white and blue shirt for Adam Craig!  Bastard!  He gave me a good ribbing during doping control as we drank bottle after bottle of water, waiting for that special feeling.

The Short Track was a blow out.  AC was riding like a small child (his words) and barely avoided getting lapped.  I finished 8th, well off the lead group, and Kelli missed the podium by a spot.  Three races in 24 hours takes it’s toll.  At the end of the day though, AC and I had 1 and 2 in the new “All Mountain” competition and Kelli was 2nd.  Not bad at all.

So now we have the luxury of 3 days in Sun Valley to ride, rest, and ride.  The trails are too many, and the time is not enough.  We’ll leave tomorrow for Montana where we’ll race the final Pro XCT, thus finishing the July push, and the meat and the potatoes.  Can I interest anybody in dessert?