I commit!
Not to Quit!

About ten years ago I was driving to a MTB race at the Oregon coast with two friends when we became mired in Sunday morning traffic. Upon passing a church and discovering the source of the slow-up, Jeff said “Can you imagine going to church every Sunday?”–to which I replied “Jeff, we are going to church.”

Last weekend in Leadville, CO was a memorable religious experience.

6000 people entered the lottery for the privilege of riding the LT100 this year, and via it and an entire series of LT100 Qualifier races, the masses were reduced to 1900 true believers. Kelli Emmett and I were lucky (?) enough to be in that number.

Kelli, Master Mechanic Steve, and I rolled into the little mining town on Thursday night and unpacked at our lodging: an apartment above a defunct bank and realty office 40 yards from the start/finish and Leadville’s only stoplight. It was built in 1880, but had indoor plumbing. Perfect.

When I asked Drew, a local, if the town folk liked having the event he said there were three camps: Those who loved it. Those who hated it, and those who left town during the LT100 so they could make a mint renting out their home, thus making 3 months mortgage in 3 days.

On Friday we joined the other racers for a required riders meeting. The large gymnasium couldn’t hold us all, so we sat outside and watched the ceremony on the Jumbotron. And a ceremony it was! In addition to the usual pre-race debriefing, the founder, Ken told inspirational stories and spoke of every riders ability to do more than they believed possible. By the end of the meeting, Ken was commanding the entire congregation to chant “I commit—Not to Quit!” while he wiped away tears. It was the most interesting pre-race meeting ever. And marginally creepy.

After the meeting, we drove the first and last third of the course in our rental car. And then we rode our bikes for a bit. We went home. We ate ourselves uncomfortably full. We prayed (in our own special ways) and we went to bed early.

There was no “Lance” at the start line. There were probably 30 Lances, but no “Lance”. There were plenty of MTB honches though. Todd Wells—top 10 in the World on a good day, Lakata—current Marathon MTB World Champion, Bart Brentjens—XC World Champ and Olympic Gold medalist, Jeremiah Bishop—4th at the Olympic test event 2 weeks ago. And 1800 other people of varying ability and similar lean and weathered appearance.

I got dropped on the first uphill. It was cold and early for going that fast! Did those guys warm-up for a 103 mile race? Anyway, the die was cast, and I’d be playing catch up. By the Columbine summit turn around at 51 miles, I was about 10 minutes back. Todd was at the pointy end with a little gap, so he had the ‘element of surprise’ working against him for the FAST descent into the legions of riders still headed up. By the time I came down, they’d been scared straight: everybody was on the right in a nice, tidy line.

On the way back I rode with Tinker and tried to make up as much time as possible. And then I blew up and tried to lose as little time as possible. Those last couple climbs were hell. I finished 21st in 7:10 (that’s hours and minutes!)—40+minutes behind Todd. And only 16 ahead of womens winner Rebecca Rusch! She beat her own record by 16 minutes. And she beat my teammate Kelli, who had to withdraw after breaking her handlebar in a feed-zone snafu while riding in 5th place.  Bummer.

At the awards ceremony the next day, Todd and Rebecca got their carts. Everybody who finished in 12:03:30 or less got a LT100 belt buckle for their effort. (12 hours plus the three and a half minutes it took the last of the group to cross the start line) If you were a little quicker, your belt buckle was a little bigger. So I got the consolation of the “Dinner Plate” sub 9 hour prize. They called every person, some 1,100 of them, by name to the alter. Each to receive their gold and silver idol. And every person received an ovation.

Thanks for Joining me.

Photos:  Powerline was the most technical part of the course.  It was steep and rutted and fun, on an XTC 29er or in a Ford.

You really could eat off of the Big Buckle.  Not that you would…

This is a brownie with two extra strength tylenol pressed into it.  Drastic times call for drastic measures. 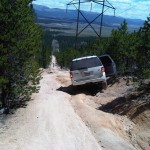 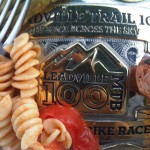 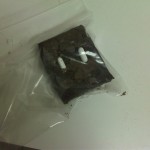