On a saturday night, two weeks ago, at the Race for Tara, I awoke with a start from a bad dream and I couldn’t get back to sleep.  In the dream (bear with me here, cuz I hate hearing about people’s dreams just as much as you do) I was at the upcoming Mt Hood Rally with my dandy co-driver, Adam.  And things were going well.  Adam had improved his pacenote reading and we were driving faster than ever, and enjoying a level of teamwork unachieved at earlier events.  With better communication, our level of commitment was rising, as our stage times were dropping.  More thumbs up in the pits, more stage wins, more groupies hanging out at the AC/CD service area (hey, it’s MY dream, don’t ruin it).  And then something happened.  Adam missed a note and we flew off the road.  I awoke before we hit the ground.  My heart was racing.  And I couldn’t sleep for a couple of hours as I realized that I was anxious about Mt Hood.

(Ed. Note-  I saved my rally anxiety dreams for the night before the race, mine were more along the lines of “we’re not fast enough, but why, is it a turbo issue?”)- AC

I wasn’t anxious because of the dream, I dream about all sorts of stupid shit that doesn’t come true.  But the dream did awake me to the fact that the better we became as a team, and the fewer mistakes we made, the more exposed we would be to risk when the mistakes were made. The more I trusted him, the more committed I became, the more lucky/skilled I’d need to be to keep us on the road.  For the first time since our first rally 3 years ago, I was nervous and losing sleep.  At least until I got outta bed at 3:30am and ate Adam’s entire tub of KozyShack pudding.

This year, the Mt Hood Rally would be a one-day rally, with two pass recce on friday afternoon.  Adam and I had seen most of the roads here before in earlier rallies, but this would be our first time racing on our own pacenotes.  Pacenotes are a shorthand way of describing corners and how quickly they can be driven.  The driver dictates them on the first pass of “recce” and the co-driver reads them back on the second pass, making adjustments along the way.  This would be a typical pacenote:

This represents about 1/3 of a mile of pretty open gravel road, which you would cover in about 15-25 seconds.

The codriver is responsible for feeding these instructions to the driver one or two corners ahead of where you’re roosting.  If reading all of that in 20 seconds with perfect timing sounds easy, try it while riding a rollercoaster. A rollercoaster that is following a track that doesn’t exist until you describe it, just as you need it.

Since AC and I are getting better at this rally thing, we had the highest speed factor of all the NW based teams at the event, and would be “first on the road”, racing all the stages with no fresh tracks to follow.  With cleared skies and drying mud on saturday, we were excited to leave some ditch-to-ditch tracks that would surely earn the respect of the racers following us.

Stage 1 of 7 was Gilhouley, the shortest, slipperiest, and most technical stage of the day.  We lined up to the start board, engaged the launch control, and blazed away.  First car on the road!  Hell yeah.  After a couple Km feeling around for grip, we started carrying the mail, as Adam was reading the notes at just the right moment, and having the notes in our own words and our own descriptions made them very easy to absorb.  By stage end, we’d put 6 seconds into second place (Bend’s Brian Svedin) and were only 2 seconds off of the stage record held by Carl Jardevall since 2004.  High fives.  And some talking, and then another High Five!  That was fantastic!  With the second pass of all the stages coming in the afternoon, the track was sure to get quicker and it looked like we’d be battling with the NW’s best for stage records.  Kick ass.

Stage 2 was the Road 17 Stage and was another great one.  After a Km of tarmac, it turned to flowy 4th and 5th gear corners with beautiful foliage and even more beautiful roads.  AC fell behind a second or two once, but was otherwise spot-on and we were going places with haste.  About half way through we were driving through a 150 meter straight, right 5 tightens to 4 into a left 4.  That 150 meters felt awesome, as we were deep into 5th gear and having a great time.  And then Adam was about 2 seconds late calling out the “tightens to 4″ bit.  At first glance, it looked like this would be another one of the close call “moments” that we usually have once or twice a rally.  We were overcommitted by about 20mph, but we were sideways (the best way to scrub speed and the safest way to drive on loose surfaces(no, really!)) and I thought we’d just bump the rear tire.  Maybe de-bead the Left rear tire, maybe do a little wall ride on a leafy berm, and have a crappy line into the following corner.

Turns out the outside of the corner was covered in clay and wet leaves, and we caught more of the berm than we hoped.  And we somehow (my video camera wasn’t rolling, er, or running, so we dont’ know how exactly) we tomahawked the crap out of the Wheels of Teal.  AC and I just tried to do a CSI recreation of the crash on my kitchen table, and still are unsure of the motions involved.  The end result was us, and what used to be a very nice little car, going trunk first down the road at 50mph.  On our roof.  I was still thinking about what gear I’d need for the upcoming left turn when I realized that we were upside down and backwards.

When we came to a stop, AC tried to show how strong he was by opening his door.  Since the car was in the middle of the road on it’s passenger side, this proved difficult, and he began freaking out.  Just a little bit, and mind you, the ground was only 14″ from his head and there were no windows anymore.  We crawled through my door and ran up the road to put out our triangles and O.K. sign so that others would continue on, but miss our car.  Between cars racing by, we spent the next 30 minutes trying in vain to jack and lever the car back on it’s feet with some big branches.  At one point, I saw AC running towards me with a massive 2 foot by 1.5 foot round of wood under his arm.  I was impressed that his shock and adrenaline made a bike racer able to carry around a giant piece of wood as if it were a down pillow.  Then we tried to use it as a fulcrum and it crumbled into a feathery mess.  And then I was just as impressed that his shock and adrenaline had made him (a Mainer!) think that that 15 ounce round of wood would make a good fulcrum.  Anyways, we had a pretty good time and had a lot of laughs trying to get our battered car back into the race.  We didn’t, of course.  It took 5 men to turn it over (or 3 men and 2 bike racers) when the sweep crew caught up to us.  They towed us off the road and one of them patted me on the back while the other stuck a “You’ve been Swept!” sticker on one of the two remaining windows.

So our race was over, and after a couple of hours of day-salvaging, by riding around in the hills on our TCX cross bikes, we loaded up what was left of the WOT and headed home.  Life’s never easy for the Wheels of Teal, but this summer’s been particularly rough.  Carl’s shopping list this week includes:   roof, right rear quarter panel, right doors, front, rear, and side glass, a fender, a bumper, some frame straightening, a strut, roof vent, paint, decals, beer, razors and salad dressing. 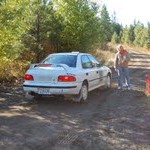 First on the Road. For the first time. 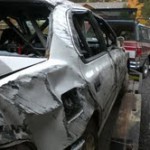 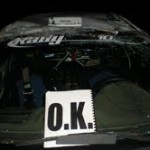