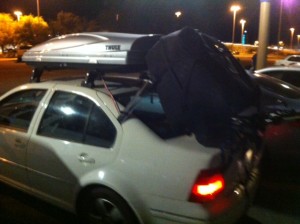 Double Pika doesn’t fit in the car? Use seatbelts as “backpack straps”.

“No”
That was my response to my friend and Giant Regional Manager, Karsten Hagen when he asked if I’d like to join his 24 Hours in the Old Pueblo team.
A few weeks later, he asked again and I said “I don’t think so” with a smile befitting a man who was sure of himself and his decision.
Later still, at a Giant dinner after the UCI CX races in Bend, and perhaps after a couple of ales, the question surfaced again. A broken record this guy! I opened my mouth and said “yeah, maybe—let’s talk about it”. To which he replied “really?” I was as surprised as he was. “Yeah, I guess. Maybe” I said.

I’ve had a long history of avoiding, ridiculing, and otherwise disliking 24 hour and ultra-endurance events though I’ve never done one. This was based solely on my preconceptions, my love of a good night’s sleep, and my brother’s dead serious advice to “Never do a 24 Hour race” after he raced himself into the ground on a 2-man team in Moab in 1998. This was advice I needed no help heeding. I didn’t want to do a 24 Hour race. Why would I do one? But, as often happens after a couple of pints, the question switched from being one of why? To one of why not?

So it was agreed: I’d help fill the roster of one of Karsten’s three teams of Giant pushers. I’d add it to the front of a 10 day training camp in Tucson, AZ, so I could at least get the training ball rolling in the right direction after whatever the weekend held. I was going to Tucson to train and do a race-thingy, if anyone asked. Not the other-way-round.

The 24H in the Old Pueblo is like no other race thingy I’ve seen. It is not in an “old

pueblo” as you might imagine. It is a pop-up city of 4000 that converge in the middle of nowhere, 60 minutes north of Tucson. It’s kinda like Burning Man, but cold beer and hot coffee are the drugs of choice. And instead of miles of endless playa, the venue is set among rolling hills covered with fast and flowy singletrack.

The point of the race is to cover as many laps of the 16 mile track as possible in 24 hours. Most of the riders were on 4 person teams like ours (not too crazy), but there were also lots of 2 person teams (really hard), Solo racers (absolutely bonkers), and a few corporate teams of 8 (wussies). The start is the customary LeMans style, with a 600 meter run to the bikes to get things stretched out before the inevitable bottlenecks on the course.

I would run/ride first for the Giant Inferior Deckerators (I didn’t name us). It’s always shocking how fast some guys can sprint in cycling shoes. I am not one of those people. But with at least ¼ mile to run, the sprinters came back and I ran into the top five by the time we reached the bikes. There were TONS of SPECTATORS at the bike corral! Once among the melee I lost track of where I was, but found myself running past most of the guys in front of me as they mounted their bikes. And then I realized there were no more bikes. Just throngs of spectators. I’d run past my bike! No problem. Just turn around and HOLY SHIT! There were 500 people riding, running, swerving and crashing towards me. I was scared. I was giggling. I made it upstream to my bike and set to work trying to pass 300 people. 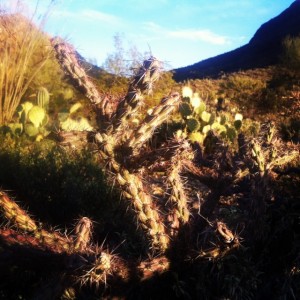 Do not touch these wieners.

And there lies the rub, so to speak. Every foot of singletrack at 24HOP is beset on both sides by the most barbaric plants imaginable: Prickly pear—or as I call it–”Ping-Pong Paddles of Death”, Cholla—or, “Flying Hotdogs of Death”–are spiny sausage segments that jump onto you with the faintest touch. These and countless other nasty water-hoarding vegetation that make the rocky earth seem an almost inviting place to crash—if you were given the choice. This is real desert. Not the high deserts east of my hometown, where the sage smells nice when you rub it, and a barbed-wire-fence-line trail is somewhere to pay extra attention. Around Tucson, every-living-thing is wrapped in barbed wire. Best to keep a tidy line whilst passing then. 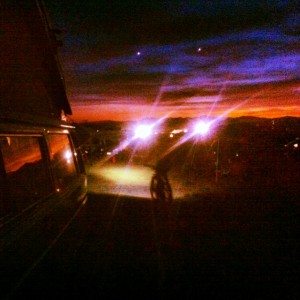 The new Niterider lights made racing the dark trails way less dangerous than the last real night ride I did…12 years ago. They’re incredible.

Some of my favorite race experiences have been when I’ve had an early mechanical problem in a local event and had to try to pass every man, woman, and child in the field to rejoin the front. Working through traffic makes for dynamic racing, with ever-changing line selection and pace. And you feel like a BOSS when you repeatedly get stuck behind packs of beginner riders, recover, and UNLEASH HELL every time there’s a passing area. It turns out that’s kinda what racing at the 24HOP is like. Always coming upon prey, and always eyeing the B-line to see if there’s room to attack and get by without scaring your quarry half to death. Or getting yourself attacked by a flying hotdog.

Between stints of pedaling and passing, there was time for cleaning up, fueling up, and swapping tales back at camp. There were hours spent lounging around with a great bunch of guys from Giant that I seldom see outside of our company’s dealer events. All of them were passionate about bikes. Some of them were racers. Some of them were former racers trapped in the bodies of dads and salesmen. We gained an appreciation of each other through a shared burden. It wasn’t the hardest thing ever, but it was hard enough to reveal us to each other in a way that a normal day of riding, eating, and—say bowling—wouldn’t have. Nobody came apart and started weeping at 4 am. (Or if they did, they were Manly about it and went for a walk in the desert.) But everybody was happy to finish their last lap, whenever it came.

Our team, the Giant Inferior Deckerators (hey, I didn’t name it!), ended up doing pretty well. After 352 miles and 25 hours, we finished 16th overall among 550 competing teams. All of our riders and all our machines came through intact. With a double dose of Stan’s sealant in the Schwalbes, I didn’t even puncture when several Hotdogs of Death stuck to my tire and flung into the air on a poorly timed pass! George tweaked a wheel a little when he had an early race skirmish with a cactus and the ground–but it was relatively smooth sailing. 352 miles and nary a flat tire. A testament to skilled men and well crafted machines.

Recovery Boots are dorky. Perfect for 24 hour racing. They were rad. Yes, I’m a dork.

By One O’clock, I was out of my chamois and packed up to head to Tucson for a real shower, and a real meal–or the realest meal I could get at an In ‘n Out Burger. In saying my goodbyes to the teams, Karsten thanked me for coming. I thanked him for inviting me. He said “What do you think of this 24 Hour racing stuff?” And I replied with a smile befitting a man sure of his answer “I doubt I’ll make a habit of it.”

Thanks to Karsten and my Giant Comrades for a great weekend.
And thanks for coming along for the ride.
Cd

One Response to Hot Dogs of Death.