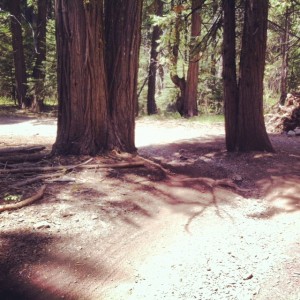 The nexus of the Downieville Universe.

What follows is a piece about the Downieville Classic that I wrote for Privateer Magazine’s 18th issue. Available at newsstands now–in fancy bike shops in the UK anyway.  I agreed to keep it under my hat until it went to press.  So better late than never then…

This year at Downieville, I saw a home for sale along the final paved run into town during practice. I circled back to take a look at the sales flyer. It was $200k. Cheap for California, but I thought it a bit much for a nondescript shack in the hills. But the flyer indicated that this shack had it’s own “swimming hole”. Not just “scenic riverfront property” or “an in-ground swimming pool”, but a low spot in the river where you could have an afternoon swim and cool off. I’d never seen the word “hole” used as a selling point before. But Downieville is different. In Downieville, a low spot in the river trumps a “gated community” or a “golf course view”. Downieville is Old Timey. Downieville is authentic. And so is the Downieville Classic.

The Classic is a throwback. It hasn’t been “modernized” and chopped up to fit the so-hot-right-now Enduro mould. They don’t bring the race to the people in some suburban park. It’s not made for TV or convenient for spectators. It doesn’t offer a course for every skill level, beginner to expert. It isn’t for everybody, and it isn’t easy. And it might leave you with a broken bike or a broken leg a long way from town and a longer way from a hospital. The Downieville trails pre-date IMBA and their homogenized standards. They were made by miners and maintained by motorcycle riders. These are all good things. Downieville is different.

Cross Country MTB racing isn’t what it used to be in the US. I believe Olympic style racing “Jumped the Shark” in 2004 when the UCI decided to allow outside assistance in MTB races. To wit: UCI XC races now have to pass through a “tech zone” twice per ~5Km lap. Meaning you can’t ride more than a mile in any direction from the pits. No long climbs, no long descents, no long loops to the better trails that usually lie further from the parking lot. To be competitive, carbon wheels with tubulars are the setup of choice at the front of World Cups. Get a flat tire? You can’t fix it–just ride the flat to the pits and have your guy replace it with another. Call me old fashioned, but I don’t think you should need a “crew” to race a 2 hour bike race. And I don’t think that MTB Tubulars should even exist, however incredible they may feel.

I grew up racing Mountain Bikes when every race was an adventure. Races like the Cascade Cruise, the Revenge of the Siskiyous, and the Shasta Lemurian. Either one big loop, or point to point, these were courses for Men. And manly women. What they lacked in technical challenge, they made up for in remoteness. But period equipment didn’t make molehills out of mountains as the new bikes do either. I remember starting my first “Revenge” in 1987 or so. My brother and I rode together, as his mountain bike had the Blackburn rack. And the blackburn rack had a full sized package of Fig Newtons bungee-corded to it. My Dad raced with a space blanket in his seat bag that day. Running into trouble at a MTB race meant you might want to have the means to make a fire. Hardly a consideration in today’s UCI XC races. 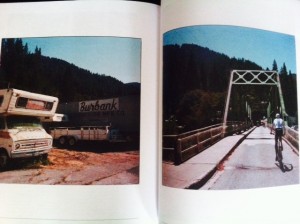 Today it might be as hard to imagine racing a bike from 1987 at Downieville as it would be for someone from 1987 to understand the features that we currently take for granted: Clipless pedals. Dual suspension. Hydraulic disc brakes. Tires full of weird white juice instead of inner tubes. 10-42 cassettes! Seats that go down at the push of a button!!! All this, and lighter than my drop-barred Bridgestone MB-2. Indeed, it’s these advances that make the Downieville XC doable for the 800+ riders that turn up every year. At this race, everyone starts the XC together. There is no shortcut for lower category riders. No playing from the Ladies Tees. Part of the allure of the Classic is that it separates the wheat from the chaff. It isn’t elitist, but it’s no place for beginners. The people that line up on Saturday morning are real Mountain Bikers. And their bikes are true Mountain Bikes.

Some of the biggest challenges come in the weeks and days and hours before the race starts–choosing the right bike setup. Without a man in the pits and with the opposing needs of reliability and light weight, choosing tires, or even tire pressures can be cause for real soul searching. Once the bike is sorted and weighed, the real challenges await. Both tracks might best be described as Old School. Both days feature prolonged, fast descents in dappled light with meaningful exposure. The tracks are often wide, loose, and off-camber. They’re not manicured. Berms are scarce and jumps are natural instead of contrived. Stream crossings abound. Wide trails offer a multitude of lines through any given corner, and much of the fun here is finding the most efficient way through the mayhem. Lessons about apexes learnt at the wheel of my Rally car can be put to use in Downieville. Lessons in how to two-wheel-drift while pedaling are free with your entry fee.

It’s the climb and the traverse at the start of the XC that keep most racers awake on Friday night. But I’m comfortable with the idea of discomfort. The descents are what fill my imagination and make me incapable of counting sheep. Though the consensus is that the XC descent is harder–and Baby Heads is a nightmare for both man and machine–the DH is where the pressure to perform is. The “All Mountain World Championships” is an Omnium, meaning that each race is worth an equal amount of points and the racer with the highest score wins. It was based on combined time until 2010, when some bald douche on a 29er won the XC by a huge margin and they changed the rules. Since the “Decker Rule” was created, it’s made it harder to sleep on Saturday night. After all, losing 30 seconds is unlikely to affect your placing in 2.5 hours of combined racing. But come Sunday morning, 30 seconds can be the difference between 5th place and 15th in the Downhill. 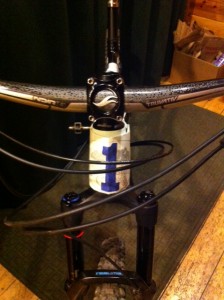 The “cool guy” number attachment. A look pioneered in Downieville long ago.

Every year, for the last four, I’ve driven to Downieville California with equal parts excitement, fear, and doubt. It’s a place I love to ride, but I’m mindful of the risks involved. And every year, some really fast dudes show up. Guys I respect or even admire. Like previous Downieville winners Adam Craig, Ross Schnell, Mark Weir, and Jason Moeschler. And recent newcomers like Levi Leipheimer and Enduro World Series star Jerome Clements. Every year on that drive south, I chew my fingernails to a nub thinking about how stacked the field is and how committed I’ll have to be on those sketchy cliff-side trails to score a win. I doubt my ability to overcome my adversaries. I doubt I can keep air in my tires. I doubt I’ll keep my bike right-side-up.

The nice thing about coming back to a place that doesn’t really change is that you know more with each passing year. The trail surface may be fickle, but the trees and the river and the rock are consistent. When you have a section of trail figured out, you can lean on that over the years. You can connect the dots. The trail becomes yours. The first time I raced in Downieville, I won the “All Mountain Championships”, but doubted I could ever win the Downhill. It took me three years to prove myself wrong. This year I won it convincingly.

The only person that doesn’t seem completely convinced is me. I’m already chewing my nails, anticipating next year’s start list and how perfect and committed I’ll have to be on those downhills if I’m to keep my place at the top. I don’t have these thoughts at other races. I’m usually as cool as the other side of the pillow. 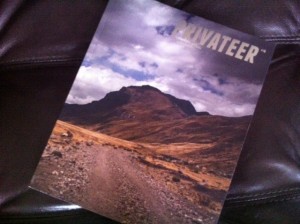 At stockists now, as they say.