Every year, at about this time, I think it’s over. I’ve been training for a few weeks, yet I feel as slow and weak as when I started. While riding some straight, false-flat climb into a cold headwind, the self doubt starts. Maybe this is the year I start getting slow. And fat. Maybe this is the year I start the decline into mediocrity, never to return. Maybe that great result I had last year was my last great result. Maybe I Jumped the Shark when I rode away from everybody at that one race, back in September…

Every year, a few weeks later, I do some race and feel like a million bucks, and I scoff at my momentary lack of faith. Two steps forward.

Yesterday was that cold day of reckoning, where it was hard imagining feeling good on a bike ever again. One step back. Here’s how I got there.

Before Sea Otter, I’d ridden a bicycle at all hard, once, in 6 months. Sure, I’d done lots of “exercising”, but not any racing, except for one little CX race in Bend. Bend, after all, is an awful place to try to ride all year. Which is great, because I’m certain that riding all year is terrible for you. Or at least for me. So until the end of March, I was abstaining from bicycles for the winter like a Priest avoids young boys for Lent. I skied, I moto’d, I swam, I ran, etc, and I soon began to hunger for long rides in the sun. A month ago, I began feasting.

Giant’s Factory Off-Road Team camp this year was in Santa Barbara. New sponsors, new team members, a new pickup truck, and a new venue: the Hotel Oceana right on the beach in downtown SB. After two years of low morale at cold and isolated Woodward West, the feeling of good fortune and promise was palpable at the Giant tent.

Between long rides with Kelli E. in the surrounding hills, I went to work setting up my new bikes. SRAM had sent a couple of guys to help dial in our new (and light!) equipment. Schwalbe made a tire presentation that gave the impression that they can do anything and do it better than anyone else (for a reasonable amount of extra moolah). We did lots of photo sessions on the trails with Jake Orness, and I did a lot of ritualistic cleansing with Tecnu every night (California’s drought is over, and the poison oak couldn’t be happier.) Towards the end of our 8 day stay (yes!!!) journalists from most of the major MTB publications showed up to get the scoop on our new additions, human and mechanical. And the catering improved and the shuttling of 3000′ descents commenced. Thanks for coming, Journo’s.

The last night of camp was full of debauchery, and the next day was full of penance. I barely kept it together for the car ride to Cold Springs trail. And then I crashed heavily (not a fan) on my Reign X on the most treacherous section. Journo’s were totally fine. Apparently they practice this party/ride thing, cuz they’re good at it.

After some wound licking, I loaded up my rally car and my trailer full of motorcycles (AC calls it adventure ADD, and it’s a terrible affliction) and headed south. Next stop: Megan and Horner’s house in San Diego for some base training.

Horn Dog was in Europe racing the Tour of the Basque country, but Ryan Trebon came down to fill his shoes as training partner. And train, we did. I rode 32+ hours in 9 days in the sunny hills and coastal byways of SD, mostly next to Ryan. And then we’d watch Horner on his TeeVee from his couch as he fought to defend his title in Spain. We ate a lot of Chipotle, and I did a modicum of home improvement to Megan’s pad, my usual exchange for a bed down there.

On my day off, I went for a motorbike ride with some new friends on some great roads in the desert. Josh and Mike, of Edmunds Online (http://blogs.insideline.com/straightline/) are car dorks with a penchant for bicycles in inverse proportion to my bike dork/car guy proclivities. We had a great time talking bikes and cars over an afternoon of Crotch Rocketry and carne asada. We even met up later for a 4 hour bicycle tour of their home county of Orange. Good times for everyone.

With Sea Otter looming, I decided to break the drive north up and stay at Andrew Juskaitis’ house in Thousand Oaks for a couple of days. Giant’s US office is in one of the best places to ride in California. Big mountain passes on twisty, seldom used roads take you to the coast and Malibu in a couple of hours. A greasy lunch at Neptune’s Net will easily fuel you all the way home, and Decker’s canyon, the main artery into Thousand Oaks from the hills, is one of the best ways to end a ride (or your life, if you’re not careful) I know of. I really wanna race my TCR Advanced SL road bike against a car on that one. Maybe next time, Andrew?

Megan had earlier invited me to hang out at the set of Grey’s Anatomy, so before I headed north, I motorcycled into Hollywood and checked it out. Turns out Horn Dog and McDreamy are buddies, so we got the full tour from the Head of Lighting, Payton. Then Patrick Dempsey, Megan and I talked bikes and racecars (he raced LeMans in a Ferrari) between takes. It was a closed taping, so we were the only people not on the clock. McDreamy would act, or whatever, and then mug around at us when M. Grey was talking. It was mildly uncomfortable and disconcerting. And it was hilarious. I like that guy.

A little lane splitting, a little trailer loading, and a little of my Chipotle burrito’s beans and rice on the ceiling of my car (damn those freeways are awful in a racecar!) and I was in Monterrey.

This year they didn’t have a Super D at Sea Otter, so I couldn’t win a 4th consecutive Sea Otter Super D. I guess part of the course was involved in construction or something. I suspect a conspiracy. There was, however, a Short Track, and an XC, and loads of catching up with people and looking pretty for photos to do.

Rock Shox came through with a new SID 29er fork for my XTC Composite 29er, and I got a chance to try out some new Furious Fred tires. The XC track was quite short and involved a lot of riding tarmac on the Laguna Seca road course, so it was good to have some really fast rolling rubber. And a few hours spent familiarizing myself with the track via Grand Tourismo 5 before I left home couldn’t have hurt.

Both of the races went much the same, for me. Caught behind some kind of MTB crash-and-carry, and then riding steady into a mid-pack position. Okay, maybe a back-of-the-pack position in the ST–it was a quagmire of a crash and a 2 minute lap, so I raced for 7 minutes. Anyway, it felt good to press hard on the pedals and get used to all the new bicycle gadgetry at speed. Perhaps some of the spectators and some of the good folks at Giant wondered to themselves if I was gonna suck from now on, but nobody said so to my face. Not yet anyway.

I took two days driving home, with a short stopover at Thunderhill raceway for a track day with the R6 (thanks, Adam!) and Eric Meglasson. Really fun track and we were just getting quick on it when it started raining on us. We made the grown-up decision to load up early, while our paddock mates were having their totaled bikes hauled back to camp. Good choice. Hi fives.

A few days and a few rides later, I’m feeling like crap. Guess it’s time to have a rest and let the mojo return of it’s own accord. After all, I leave for AZ and the “Whiskey Fifty” stage race on wednesday. It’s almost time to feel strangely fantastic again. 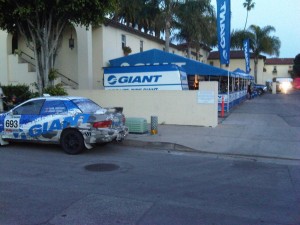 The big top and the Wheels of Teal in Santa Barbara 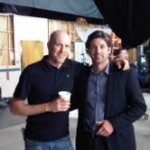 I make this guy look even better. 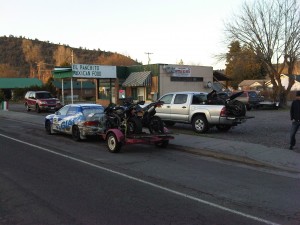 One Response to Southbound and Down