I was nervous when I answered the phone that day in late June. JB Niday, my contact at Rally America was calling, and he had news for me, good or bad. What made me nervous was that I didn’t really know which was which.

“You’re in” would mean that I’d have to spend thousands of dollars to fix up my car, and then trailer it 1000 miles, where I would probably destroy it and need to use a forklift to get it on the trailer for the return drive. Of 1000 miles.

“You’re out” would mean that I’d drive the car to the Deschutes Brewery to watch the race on cable. I’d take more naps for the next 6 weeks instead of working on the car. I’d save a lot of money. But I’d wish that I had made the cut. I’d wish JB had said “you’re in!” And maybe I’d wonder what could have been for the rest of my life.

I picked up my phone, I pressed the green button, and JB said “how would you feel about being the alternate for SuperRally?” And honestly, I had no idea how I felt about it. Four cars at a time, on the same course? Seventy-Five foot gap jump? Against 12 of the world’s best Drift champions, rally icons, and door to door racers? In the Wheels of Teal? I said I’d call him back. He said “I know you want it, it’s the X-Games!” and I agreed. I told him “I’m in” and hung up. Shit.

So I called my crew/Crew Chief/Dad and told him the good/bad news. And since it was a 2000 mile round trip in an old Dodge truck, it was all good news to him. He’s funny that way. So it was agreed. I’d get the Wheels of Teal in fighting shape, and we’d go to the LA Coliseum, hoping to come back with an intact car. And prepared to come home with scrap.

There was a lot of work to do. The X-Games rules allow for a 45mm turbo restrictor instead of the usual 34mm, so I enlisted the help of Mike Olsen to make a new “metal donut”. I set up an appointment for the Wizards at Surgeline Tuning to dyno-tune the car for the new restrictor and some other widgets. I called about some fancy used Ohlins struts I’d found online for less than an arm and leg (how much does a kidney cost?) and had those sent out. I bought an expensive new seat that protects my neck from lateral impacts from things like trees or Ken Block. I got in touch with BF Goodrich, who generously donated the same G-force tires that went 1-2-3 at last year’s X-Games to the cause. And I fretted over all kinds of little stuff. When the car was “as ready as it’s gonna get” we loaded her up.

After a long drive, punctuated by a day at the Laguna Seca MotoGP, my Dad and I were in Castaic, CA, having the WOT wrapped in the new Giant Livery. The folks at Giant were in to it! They took care of arranging the car’s wrapper, as well as having tee-shirts made, and even securing a deal with MTV’s Nitro Circus crew to use their RV for our pit area. Andrew, Tabetha, and Jake were even gonna help man the pits at the event. All of a sudden, we were starting to look pretty professional, kinda sorta! After an evening MTB beer loop with the usual suspects (and my Dad!) from the Giant headquarters, we did a quick photo shoot, and were ready to roll to the LA Coliseum.

Once at LAC, we’d get a practice session on Friday afternoon, and a practice session Saturday afternoon before that evening’s races. Once the pits were set up and the pleasantries exchanged with fellow racers, we pushed the car to the stadium (funny rules, those) and I did the first practice. The course was entirely inside the Coliseum, a place I only remember seeing in the 1984 Olympics, and it was rough! The square edged G-outs and jumps going up into the turnstiles were square and awful, but I had some new suspension, and I reckoned I better get used to the abuse. Before my last go-round, another driver told me I was jumping further than anybody else was in practice! And that made me feel kinda proud, but mostly stupid, because I really didn’t have the resources to fix what I’d break out there. So I took it a little easier on the next lap. And that’s when I broke a rear drive axle in half.

So we spent the rest of the day trying to find parts and people who could weld them together, because the axles were some custom jobbies that Mike O. and I had engineered and fabricated. They’d worked flawlessly for 5 weekends of stage rallies, but with the newfound power (470+lb ft of torque!), perhaps they were the weakest link. By dinnertime, we had both a source for the part we needed (Subaru parts aren’t as ubiquitous in the LA basin as they are in Bend for some reason…) and a welder who was up to the task. Before the next practice session on Saturday, the part would be fabricated and installed, and again, everything would be right in the world.

After that short last practice session of three laps, it was off to the pits for the Giant rally team to watch all the teams with blown engines and crumpled cars try to fix everything before the 7:15pm race start. Potential non-starters were everywhere! Broken suspensions, body damage, and several blown engines were being repaired feverishly by the armies of techs for each team. It was fun to watch. We washed the Wheels of Teal’s windshield again and waited to see who’d show up to the remote pits at the stadium entrance.

With 15 minutes till rollout, I asked Travis Pastrana, who’s pit was adjacent to ours, where his car was, as it was the only car missing. TP claimed his engine (his fourth of the weekend) was running and the car would be there any minute. And sure enough, it drove right into his pits a few moments later. And then it promptly caught fire. Thus began the most dramatic 12 minutes I’ve ever lived. No less than 15 Subaru mechanics converged on his car, put out the fire, tore it apart, put it back together, and did some stuff with a laptop that didn’t appear to be playing Tetris. The car ran and then didn’t again. And I told TP “good luck out there”, and then he told me “good luck out there” and then vice-versa. And there were TV cameras everywhere. With a minute to go before the grid, the Head Honcho Dude (I’m unsure of his official title) took TP’s start lane card off of his dash. And he put it on mine. And he pointed at the stadium. I’ll be darned. I was in.

The start grid was surreal. The start ramp was so steep you couldn’t see half of the stadium from the top. But I could see tens of thousands of fans. And I could see the other three drivers, all looking very serious. They did not see me. I was grinning like a loon.

I got smoked off the line. I’d broken another driveshaft! The WOT was gonna have to get by with front wheel drive for the race. This was not ideal. I hadn’t practiced The Jump, and I really didn’t know if 2wd would be enough to get me out of a tight 2nd gear corner with enough heat to get over the hump, so to speak. On the 3rd of four laps, I lined it up and (don’t miss that shift to third gear!) sent it. Big view of the sky, big view of the ground, perfect backside landing. Sweet! By then I was in a distant 3rd behind some fast dudes in faster cars and I had a lap to go. As soon as I’d landed, I knew I wanted to do the jump again. What the hell. Second verse, same as the first. It was like butter. 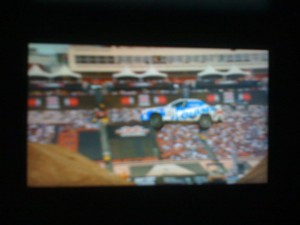 I finished 3rd. Deegan was first, then Rooney, then Yours Truly, and then Kenny Brack, last year’s XG champ and Indy 500 winner, who crashed out in the first corner in 4th. After the checkered flag, I rolled down the windows to cool the cabin as I transited through the rest of the course. The crowd of 30,000+ made so much noise as I drove by, I actually looked out the other side of the car to see if the Rockstar umbrella girls were taking their tops off or something. Turns out they were cheering for me! I guess they noticed I’d snuck an extra jump. For lack of a better salute, I gave them the thumbs up. I’d stolen TP’s start spot, why stop there? Big thumbs up.

An hour later, and after lots of high-fives, we were loaded up and headed back north. I had a flight to catch to get to Giant’s Dealer Link in Park City Utah. Good thing my Dad likes driving old Dodge pickups. I’d been run ragged ever since I talked to JB back in June and needed a nap. Finally, I could sleep easy, knowing I wasn’t gonna die wondering what could have been at the X-Games.

Thanks for riding shotgun